In June 2017 a library colleague and I were discussing the celebrity recipients of the Queen’s Birthday Honours. We began to toy with the idea of nominating one of the clinicians who uses our service for an award. The clinician was well regarded in her field, an active researcher with numerous published works and a long career in the NHS. Definitely the sort of candidate you’d expect to be honoured. We presumed it would be an easy process, fill out a couple of forms and then wait for the invitation from the palace……

It turned out to be not quite as straightforward as we imagined. The nomination itself took nearly six months to compile and submit, we waited two years to find out that our nomination had been approved and then because of COVID-19 it was a further eighteen months until our clinician collected her OBE from Princess Anne at St. James Palace.

Despite the delays and work involved it’s something we’d definitely recommend doing. Aside from the pleasure gained when someone ultimately receives an award, putting together a nomination can be a useful way to network and create contacts both within and outside of the organisation. We developed relationships across many directorates and teams and raised the profile of our service, gaining a few twitter followers along the way. Incidentally, we learned a lot about a serious medical condition too!

We have put together a few pointers if you’re considering giving it a go.

2. Nominations require a proposer and at least two supporters. The nomination should include supporting evidence. As well as a list of professional and academic achievements we included several patient testimonies and stories.

3. It isn’t sufficient that nominees are good at their job, they should be outstanding innovators and leaders in their field. In addition, nominees whose work fits certain criteria such as mental wellbeing, diversity or the environment are well received.

4. If the candidate has links to charitable enterprises this is very helpful.

5. You’ll need to be patient. It can take a long time.

You can write to the Lord Chamberlains Office or submit the application online: https://www.gov.uk/honours/nominate-someone-in-the-uk

So if there’s someone outstanding that you feel deserves an award and you have the time to spare we’d say go for it. 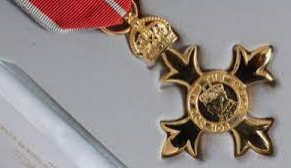