Ian King, for many years the manager of health library services at Bradford Royal Infirmary and an active spokesperson for health libraries in Yorkshire, died in August of this year. Known locally and nationally, Ian was seen by numerous librarians as being, for many crucial years, the 'go to' person for help and advice, which was always unstintingly given. He was regarded with a rare blend of respect and affection by the many colleagues he helped and mentored. 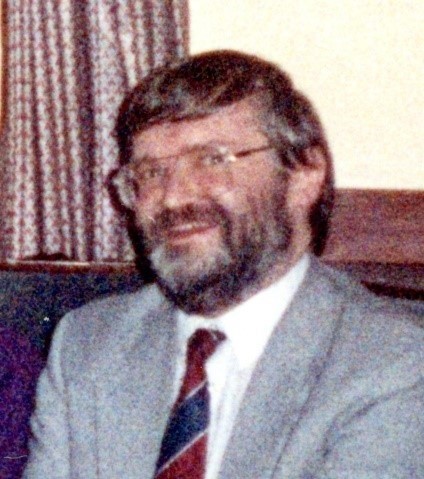 Born in Surrey and with his librarianship qualifications gained at the then Ealing Library School, Ian’s NHS library career began when he joined the library and education department at Pinderfields Hospital, Wakefield, in the early 1970’s. At that time, regional organisation of hospital libraries in Yorkshire was a patchwork of hospital, university and public library operated services. Pinderfields was one of the latter type, one of a number run for all NHS professional staff by the then West Riding County Library. This absence of overall NHS coordination in Yorkshire was to have a significant impact on Ian's future career. Although the integrated library and education services at Pinderfields were known to be at the cutting edge, Ian was very surprised to discover that his duties included going into operating theatres and mortuaries, and filming various operations and autopsies 'live' for staff training videos!

The majority of Ian’s career was served in Bradford, where he spent several decades in the Health Library at Bradford Royal Infirmary (later Bradford Teaching Hospitals). He managed and mentored a number of fellow professionals, many of whom went on to take up senior roles in other library services.

He was instrumental in establishing health libraries elsewhere in the city. He provided a service for Bradford Community Trust for many years until they set up their own service in the late 1990’s. He was also key to the development of the Bradford Health Authority library during the same decade. It was on Ian’s watch that the School of Nursing library service at St. Luke’s Hospital, Bradford integrated with his medical library service at BRI, creating one of the forerunners to the establishment of the multidisciplinary library and information services we take for granted these days in the NHS.

Always astute in recognising situations where he believed healthcare information services had an important part to play, he quickly set up, after the tragic fire at Bradford City stadium in May 1985, a city-wide information service available to all medical and professional staff involved in the treatment and rehabilitation of disaster victims and their families. This service was coordinated with the city’s Public Library and drew on the resources of the British Library at Boston Spa. Recognising the information needs associated with the racially diverse population of Bradford, Ian set up the Ethnic Minorities Health Current Awareness Bulletin. This became a popular quarterly publication, distributed directly and through SWETS Information Services, with several hundred subscribers throughout the country.

In addition to the impact he made at Bradford, Ian was well known both throughout the Yorkshire region and nationally. For many years, the Yorkshire NHS region was one of a minority of regions which made no provision for the appointment of a regional librarian, or other form of region-wide coordination and development of library services. Recognising the need and desire for local and regional co-operation Ian, with others from across the region, laid the foundation for the Yorkshire Regional Association of Health Care Library and Information Services (YRAHCLIS).
Throughout his time at Bradford he devoted a considerable amount of time and effort to nurturing this very active group to support the development of staff and services, sometimes advising hospital managements and assisting with recruitment, until one of the successive NHS reorganisations eventually resulted in a regional post being created. He was particularly pleased that the first person in this new role was one of the librarians he had himself employed and mentored.

He also worked hard to improve services to libraries through the Yorkshire Joint Healthcare Libraries Service (JHLS), a network of libraries in West and South Yorkshire - some of them actually in the Trent region - which opted to coordinate more closely, based on centralised book selection, purchasing and cataloguing functions, and employing a dedicated staff member. Ian was one of the prime movers in this organisation over many years.

He was also very active at the national level, representing YRAHCLIS on the Regional Librarians Group, at the time the recognised coordinating forum for libraries in the NHS, where he was one of the few members who was not an appointed Regional Librarian or a University Medical Librarian with an NHS contract. Despite this disadvantage, throughout his many years on RLG he was known for speaking up for hospital libraries from the perspective at the ‘sharp end’ and for service users of all disciplines and professions. Much is owed to him, by librarians and their staffs, especially in the district general and smaller health libraries across the whole region.

Having originally moved to Yorkshire to marry Lynne, who was from Wyke in Bradford, Ian developed a great affinity for the Dales and Moors. After retirement in 2006, they moved to Gayle, near Hawes in Wensleydale. But retirement didn’t spell “pipe and slippers” for Ian. Ever gregarious, he promptly integrated himself into local community life and activities. He
soon became involved in the local community, becoming clerk to the Parish Council and various local school governing bodies, Chairman to Friends of Gayle Mill and one of the market house trustees. Readers who have visited the Mill may well have been guided round the building by him. Ian also used to drive the Little White Bus around the Dales in the early days. He became a friend and supporter to other local organisations, including Muker Silver Band and the Georgian Theatre. For a while Ian was an honorary columnist for the Darlington and Stockton Times. More importantly, life in his beloved Dales enabled Ian to indulge his passions for real ale, cooking and eating out in country pubs!

Ian passed away, peacefully and at home, following a short battle with cancer on Thursday 8th August 2019. He leaves wife Lynne, children Martin and Helen, and grandchildren Aidan and Thomas. He also leaves a lasting gap in the affections of friends and colleagues, with many of whom he had stayed in touch.