It is challenging thinking back and to be honest it feels a little bit like a luxury. We talk about a ‘new normal’ but in reality, the library has always stumbled from one crisis to another. We have always adapted to the needs of the organisation. It will also continue to do so and what that looks like yet is still an unknown. What has been different for Covid, was despite being well placed; it still blew in and left us topsy-turvy.
When Silver Command formed, we were there to support the technology hook up for video conferences and lending the equipment to connect. We were an early adopter of Teams and supported IT & Organisational Development to get onboard. When the time came to go virtual, we used lessons learned from a previous issue with asbestos removal, which allowed us to move to virtual service and homeworking in under an hour.

The library became part of the Covid-19 Health & Well-being (HWB) work stream. Previously we supported the HWB work, now it was prepping for the before action review to minimise the psychological impact and we had time to work. Initiatives such as the health & well-being area in the library, rolled out across the trust. We looked at the basics: water, food and somewhere to rest, take a breather and check friends and family were OK. We started water delivery, honesty larders and we costed the development of four well-being rooms on the new Covid Wards they were preparing to open. A rental company approached us and said we could borrow their furniture. We turned around the basic rooms with information packs and furniture in under 48 hours and the 4 rooms became 17. We decided it would be nice to kit them out with treats, so the Mid Cheshire Hospital Charity created an Amazon wish list. It launched the Friday and by the Monday we started to see a build-up of offers of support. Whether companies, local groups, individuals, we were overwhelmed by the generosity of our local community. The team of two in the charity were working remotely and did not have capacity; supplies were short staffed and focused on PPE, the mail room on minimum staff. A donations team began, based in the library and soon redeployed staff and volunteers joined us to manage the water drops and stocking of the health & well-being rooms. It grew to the accepting, sorting, logging, distribution and follow-up of donated items.

“Sue and the team we can’t thank you enough for all that you have done and are doing to make the life of our pharmacy ward based team more comfortable, tolerable and reassuring.”

We worked with the HWB Team, Charity, HWB Team, Catering and Health & Safety to deliver to all areas and put in wellbeing support, linking to mental health first aiders, and counselling schemes, making people feel safe and valued to help them get through the day.  When the first member of staff passed away, we were there with handkerchiefs, chocolates, and supporting people in the wellbeing rooms.  We helped to greet new members of staff with some sweets and a new nurse’s fob watch.  We created cups of kindness to celebrate the contributions people made and supported Project Wingman.  We shared thanks and children’s pictures.  We worked with laundry to process scrub bags, mask extenders, headbands and love hearts.

We were soon running dry goods, frozen and chilled distribution hubs, we trialled food delivery to the ward areas where people could not leave and soon the menopause emergency kits we developed were adapted for use on all ward areas. There were evening and weekend food drops and co-ordination with quality governors in the community to make sure they were always included.

Throughout this, the library has remained open with full service, with current awareness service running 7 days a week.

“Just wanted to say thank you for the literature searches you have done for me regarding COVID19.  The abstracts around elective surgery and COVID were extremely helpful.  I sit on the 'Prioritisation of Cancer Surgery during the Pandemic' group where we are trying to make the correct ethical decisions about proceeding to surgery.  The abstracts highlighted the increased risks of proceeding with elective surgery during COVID and I have been able to take that back to the group to help us in our decision making process.” 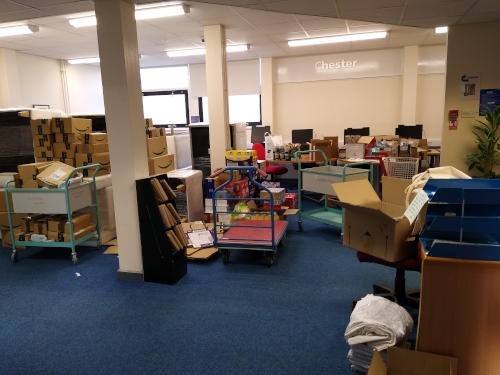 We have worked with a large number of people. Still some of the porters and mailroom will challenge me to ‘The knowledge’ as now I have visited or dealt with every single team in community and hospital. The library has been associated with fairness, equality, chocolate Easter eggs and Ralph Lauren. It will be difficult going back to pens and coasters. Susan Smith was nominated was one of the Trust’s Covid Hero’s. Community and Clinical Commissioners presented with a cup of kindness for all the support they received making them feel part of the organisation.

“From Easter Eggs to healthy yogurts by way of hand creams, donated uniform bags and new sofas for staff well-being rooms, CCICP community teams benefited from the fair and timely distribution of donations managed by the JET library team alongside a listening ear and ad hoc support for PPE delivery to supplement routine drop-offs from CCICPs team of dedicated Community Support Workers. Staff were so grateful to receive items and commented frequently that it made them feel valued and appreciated.”​

It has been a great position to learn about people and how the organisation works.  Try shadowing a porter or housekeeper sometime.  Many have been in other professions, so there is a wealth of knowledge and experience there.  I have had every board member in the library at some point for a chat and even had a NED as a volunteer.  One who was involved in Devo Manch planning and future planning of public library services.

Now a different chapter is starting.  I currently have a member of the surgery and cancer quality team based in the library office, and ward based pharmacists using the library as a base.  I’ve given up and admitted we are part of the health & well-being team and working to see which projects we will maintain, which need adapted and what we have learned.  The art project from a few years ago has seeded a new art project group headed by the charity and we are now looking at how to best launch and help people move on from Covid.  We have uncertainty about the future of the library team, as partners are all facing their own challenges, but still after the Teams meetings end we are still sitting down to the literature searches and deal with book requests.